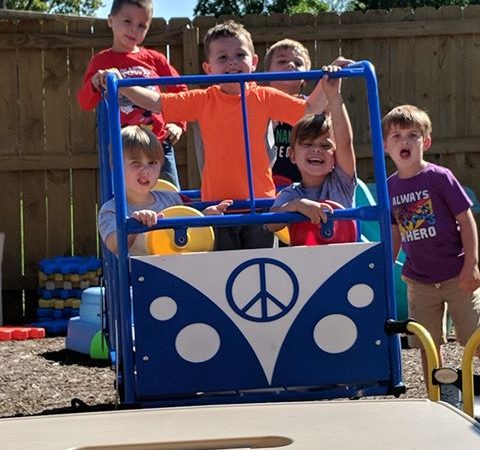 It’s a bright day.  My windows are down and I’m enjoying the breeze in my hair as I head out to Sprouts Childcare.  The owners, recipients of the Quality Childcare Initiative Grant for 2017-2019, have agreed to speak with me about some of the drastic improvements the grant allowed them to make.  Out in West Terre Haute, I turn into the driveway and am greeted by three different buildings.  I gather my supplies and get out of the car.  Where am I supposed to go?

There’s a large two-story building to my left, a small one-story building in front of me, and a small home-like building to my right.  There’s movement through a window in the right-hand building.  I take my chance and head that way.  When I walk in the door, I’m approached by three young women with extremely confused looks.  I explain I’m from United Way and am there to interview the owners.  One of them recalls something being said about an interview and takes me over to the two-story building.  It’s nap time and cots are out everywhere.  Christina Mckeehan quietly says hi to me and then ushers me to the middle building. 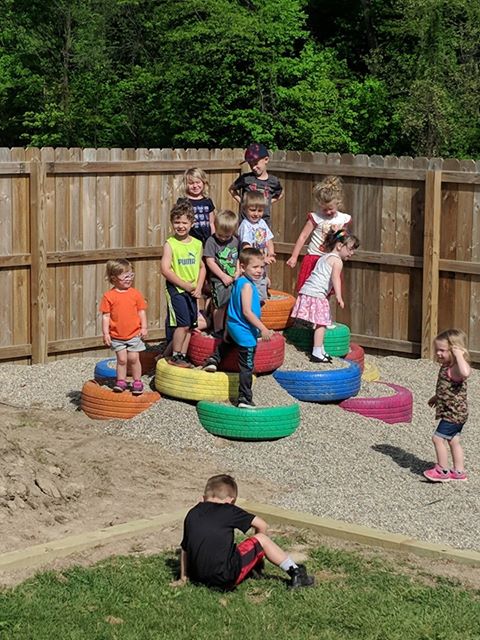 I’m already stunned.  Three well used and highly functional buildings for one childcare is impressive, and thankfully I’ve gotten a glimpse of all of them in the few minutes that I have arrived.

Gretchen Rhoades, co-owner of Sprouts Childcare and mother to Christina, joins us at a table one foot above the ground, and we make ourselves comfortable on tiny chairs.  The two are all smiles. Christina has the forefront of the attention and talks the most, while her mother sits with a contented smile and the occasional interjection of detail.

“Ok! So, tell me a bit about all of this?”  A good place to start and for someone who just got ushered between three buildings necessary.  Christina dives into the question.

“We opened the first one in June of 2011.  It was originally called Little Sprouts Daycare.  We opened it  because we both wanted to stay with my daughter, who was three-months-(old) at the time.”

“And we liked it!” Gretchen shows her enthusiasm for their facility which has since grown from it’s single building to three.

Christina explains that after filling up their first building they build the two-story “Big Sprouts” so that her family could live upstairs and the kids could be downstairs.

“So, we separated 0-3 and preschool and after school over there.  We did that for a while, got full, waiting list, lots of after schoolers.  So, we converted the garage.  This was a garage.  A full-on, dirty gross…”

“You couldn’t walk in it.” Gretchen

“So much stuff.” Christina

I’m getting a kick out of watching the mother-daughter team.  Obviously close, they make a great pair to talk to.  Each of them is extremely animated and pleased with where their business has gone.

“This was always, kind of, our back burner of ‘well if we need a third location’, but we had so many other things that we had to do.  We needed a new fence.  We didn’t have the playground that we wanted.  So, through the grant, since they paid for that, we thought we could do this.  We got a loan for this.  We thought we’ll do a little bit this year and the next year and eventually we’ll get where we want.” Gretchen explains the process most businesses go through when planning things.  There aren’t funds to make great projects happen out of the blue.  Time is the only way to make it happen.

“We thought that all of this was going to be long, long into the future that we could afford, but because of the grant we were able to do it a lot faster.”  Christina smiles as she looks around Sprouts latest edition.

Gretchen and Christina further explain that they used to be a Path’s to Quality Level 2 facility, but through the grant, they were able within just a year and a half to become Level 4.  They added curriculum, something they didn’t have at

all before, became nationally accredited, acquired new playground equipment, and had several hours’ worth of staff training. 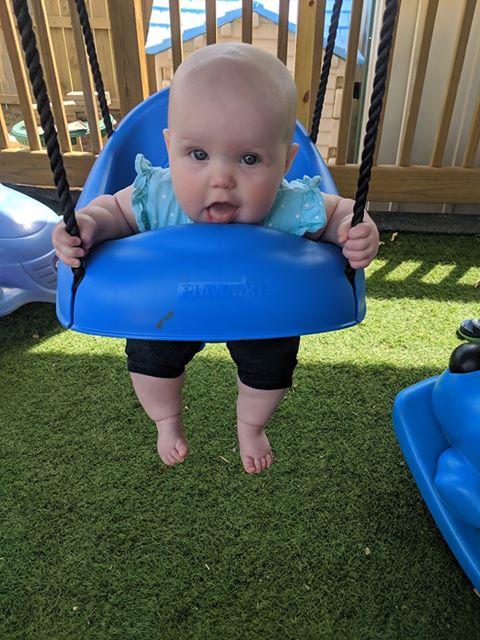 “It was something we thought we would get to, but thanks to the money we were able to (do more).  We only had one playground before.  So, we were limited to who could be out when.  We had two buildings, so we had to play that.  Now with the money from the grant we were able to build our second playground.  So, we can both be out at the same time.  Which with Level 4 you have to be outside so much time.” Christina and Gretchen take me on a tour of that playground.  A metal VW Microbus to pretend to drive on the right, a plane for kids imaginations to take flight,

and fake grass on an enclosed deck for babies to have a safe outdoor experience are some of the most prominent elements of their playground, but there are so many ways to explore out here.  The two women lament that the area is messy.  Toys are scattered.  Play vehicles are on their side.  I couldn’t be happier seeing all of it.  This place is played in with a ferocity only small children can imagine.

Sprouts Childcare is already on a waitlist again. They are a popular place to send children because of the quality of care they are able to give.  Gretchen and Christina are the reason that quality is available, but the Quality Childcare Initiative Grant gave them the freedom to achieve what they had already set out to do.

What’s on your back burner?  Apply for the Quality Childcare Initiative Grant and let your imagination and your facility’s kids’ imaginations take flight.