I’m standing in Maryland Community Church at a little after 7:30.  It’s July 26th, the first day for United Way of the Wabash Valley’s Serve the Valley.  I, for one, am not a morning person; secondly, I’m a writer.  Physical labor is not something I generally look forward to.  As I look around the room, it seems hard to find anyone else that seems to match my lack of energy.  In fact, the gym (where everyone has gathered for a sendoff breakfast) is brimming with excitement.  Conversations are flowing.  Loud laughter is bouncing off the walls.  Children, parents, factory workers, baseball players, business men and women, churchgoers, and many other different people from a variety of walks of life are gathered eating and gathering strength for the day.  I’m getting excited about the day just from watching them.

I approach a table with two men who got here somewhat early.  They seem very apprehensive about a woman with a cellphone attached to a tripod coming to their table and even more so when I ask if I can record our conversation, but never-the-less they agree.

Eli and JD are employees from Vectren.  While they would normally be at work right now, they are instead eating some of the best biscuits and gravy to grace the planet and moments from heading out to give back to the community. 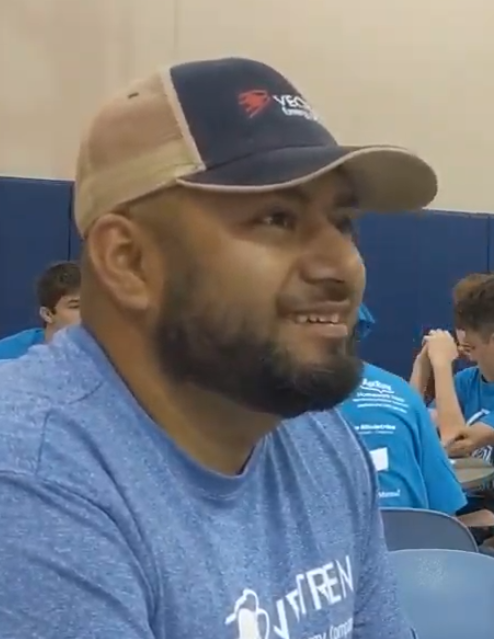 They tell me that they are heading out to Fowler Park for their service project.  I ask the two gentlemen what they will be doing.

“That’s a really good question.  Whatever they tell me to do.”  Eli isn’t brushing it off, he’s excited to go out and make a difference in the park.   JD nods along but is very focused on his breakfast, but when I ask if they are excited, he gives me a bit more.

“Yeah.  Vectren is a big player in this.”  He doesn’t elaborate, again turning to his breakfast.

“So, what do you think of breakfast?”

“Great,” JD gives me a single word to focus better on the eggs in front of him.  Eli, however, is more forthcoming.

“Its great that we got here early. The other guys from Vectren may not be getting some.”  Eli scans the room that is filling up quickly and at the two lines going down most of the wall.  I had already been informed that there were many people that were volunteering from Vectren.  The company takes pride in making a difference in the community whether that’s as a sponsor for a kids’ sport team or encouraging its employees to make that difference in person by volunteering.  The idea of the whole crew getting here for breakfast makes me wonder just how many biscuits the breakfast volunteers actually made.

“They’re all going to try and come in to breakfast?”

“They’re all just about here.” Eli is mostly done with his breakfast. “My man over here gave me the heads up to get here early.” He chuckles still looking at the crowd, probably waiting for his coworkers to gloat that he got an amazing breakfast.

“How many times have you done this before?”

“This is my first time,” Eli says.

JD, now done with his breakfast, pushes his plate away. 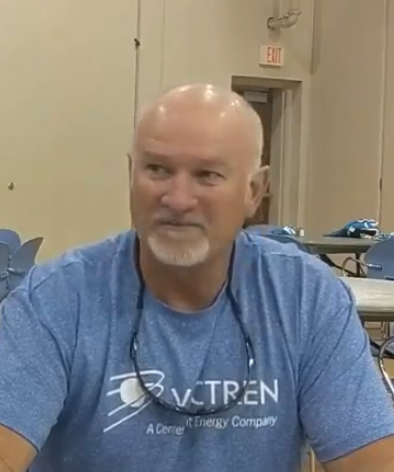 “Yeah,” again JD has his priorities in line and breakfast is not something to be trifled with.

“About every time that Vectren has been involved with it.  So, I’d say at least 5 or 6 times, maybe 7.”  That explains how he knew about breakfast.  JD goes on to tell me that Vectren has been to all sorts of places volunteering throughout the community.  They’ve helped clean up baseball fields, worked with Habitat for Humanity, volunteered at homeless shelters.  Vectren is a big player in this!

Companies all over the Wabash Valley have come to realize that giving back to the community makes a better environment for the people they serve as well as the people they hire.  More and more people are pouring into the gym for breakfast and seats are going fast, but as I look at the tables I notice something.  Most of the people here are groups from companies.

Clearly, they are close coworkers.  The kind of close coworkers you text on the sly in a meeting that could have been an email.  They are all laughing and talking.  So many people have come to give back to the community and make the places they call home better places to live for themselves and for hundreds of people across the Wabash Valley.  It is an amazing sight to behold.

That’s what it means to Live United and that is what United Way of the Wabash Valley is all about, building better lives for people by bringing people together.  Serve the Valley is just two days, but the impact will last much much longer.