Posted by Abby Desboro In Featured on Homepage, News & Events

United Way of the Wabash Valley hosted it’s 2018 Annual Meeting at the Jeanne Knoerle Sports and Recreation Center at Saint Mary-of-the-Woods College.  The event brought together agency partners, volunteers and members of the community in order to celebrate the United Way, but also provided a look to the future of the organization.

As a matter of business, new Board Members were elected by the donors and included Jameel Ahmed of Rose-Hulman, Christi Fenton of the Vigo County School Corporation, Jeff Fisher of the Terre Haute Fire Department and Bill Riley of Saint Mary-of-the-Woods College.  Recognized for his 6 years of service to the Board was out-going member Judge John T. Roach of the Vigo County Superior Court.

The United Way also recognized two outstanding volunteers for their work supporting the organization.  Awarded annually since 1968, The Richard D. Newport Award recognizes an individual who has piloted a new course toward increased participation in the United Way Resource Drive.  This year’s winner was Jeff Fisher, the Chief of the Terre Haute Fire Department and Co-Chair of the 2017 Resource Drive.  The Solomon Award has been awarded annually since 1991 by the United Way Community Impact Committee to a leader in the community who has demonstrated extraordinary wisdom, responsiveness and flexibility in distributing funding resources entrusted by donors to the United Way.  The 2017 winner was Hicham Rahmouni, from the Lugar Center for Rural Health, a Division of Union Health. 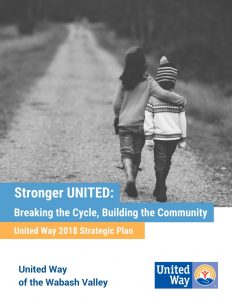 The highlight of the evening was a look to the future by the United Way and the announcement of a bold goal for the community and a new method to achieve it.  Richard Payonk, Executive Director of the United Way, explained that, “Our United Way must become a strong community problem solver focused on the most critical social issues.”  To identify those issues, over the last few years the organization held numerous community conversations, asking the community what concerns they see and what kind of community they want.  Payonk explained that what they heard was not surprising.  The concerns included drugs, a lack of high quality jobs and safety, but more importantly, he explained “threaded through each of these issues was the devastating impact of generational poverty and our inability or interest as a community to effectively address it.”

To highlight the issue, the Knoerle Center was surrounded in informational posters with the introduction “I AM ALICE”.  ALICE, a study through the Indiana United Ways, stands for Asset Limited, Income Constrained, Employed.  The research shines a light on the number of struggling working families in our communities that live above the federal poverty level, but still far short of making ends meet.  Payonk explained the ALICE Threshold for a family of 4 required a full-time wage of $24.45 per hour, yet surprised the crowd showing that 68% of jobs in Indiana pay less than $20 per hour.  “Which leads to the staggering figure that over 30,000 households in the Wabash Valley are living below the ALICE Threshold and struggling each day,” Payonk said.  That represents 40% of households in the United Way’s 6-county service area.

United Way’s bold new community goal is to work to help 10,000 households out of financial struggles—out of ALICE—and into stability.  In order to achieve it, United Way will be shifting its strategy from a long history of fundraising and allocations to agencies, to making investments in the community as a collective impact organization.  Payonk explained, “no single policy, government department, organization or program can tackle the increasingly complex social problems we face.  The approach calls for multiple organizations to come together with a common agenda.”  Payonk feels United Way can be a backbone organization to bring partners together to achieve this bold goal.

In its shift to a collective impact organization, the United Way will be forming Impact Councils to focus on the main topics that were heard in the community conversations and can make a big impact on the success of struggling working families.  The councils will bring together subject matter experts, people whose lives are affected by the issue, business leaders and other organizations working to affect each area.  Based on their knowledge, members of the Impact Councils will recommend and monitor the investments of United Way resources in efforts that align with the bold goal of moving households to financial stability.

United Way has already begun developing new investment guidelines for the resources donors provide and will begin working with their existing agency partners to join them in this exciting new goal for the community.  They expect a 3 to 4 year transition period from their current funding methods.  “We’ve long supported agency partners doing great work in a broad field of social services.  This new goal narrows our focus and deepens the impact where our community says they need it the most.”

If anyone is interested in volunteering in the work ahead, they should contact the United Way of the Wabash Valley office at 812-235-6287.