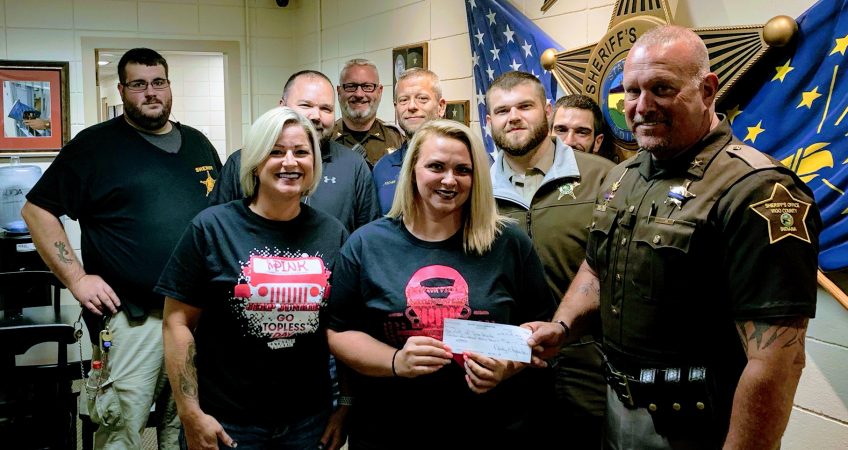 We’ve learned that the Sheriff has a mischevious side to him that is always adorable when grandkids are involved.  He loves his family and is a man of extremely few words on most matters.  All of that aside, this man is someone who likes to give back to the community.  Whether he’s doing so in service through the Army or serving as Sheriff, or if he is doing so through volunteering through United Way, it is easy to see that serving people is something Sheriff Plasse is passionate about and it is something he admires greatly about our community.

“Tell me something you love about the area that’s specifically Wabash Valley.” I smile at the Sheriff still holding my breath on whether it’ll be a two-word answer or something more. John Plasse gives me his gift of words in response.

“I mean, just to me, it’s the people.  I hear it a lot that people say, ‘Everyone is so nice here’, and I don’t think there’s anything better than that.  If people can come to you and say, ‘Everyone I dealt with there was just really nice, and it’s a great community,’ I think that’s what really stands us out above other communities.  The people here are really nice.  They do so much for other people.  The giving of this community, especially if someone is in need, is tremendous.”

True to his nature, John says that his favorite thing about United Way is volunteering during the Day of Service, or Serve the Valley as it is now called.  Having just gone on this past week, what better way to highlight past projects that have gone on?  I ask him what his favorite project was.

“The one we did at the Children’s Museum.  It was really simple they had the design to make a bookcase.  I like to work with wood stuff anyway.  That was just right up my alley.  I think there were a lot of us.  There were like eight of us there to work on one bookcase.  So, we were kind of in each other’s way.  We had to drill holes in each one and screw them together, but we got it done.  Obviously, it goes to good use because it goes to our kids in our community that go to the museum.  The museum is a great place to go to.  So, to me, that was probably the best thing I was involved with.”

When I reached out to Jamie McDowell, Director of Operations for the Children’s Museum, he was excited I asked.  He told me they still use the shelf, and he remembers that day well.  He was so excited, in fact, that he sent me a video depicting our dear Sheriff working on that very same shelf!

John Plasse is a man who just loves to help out and that is why he loves United Way.

“United Way, to me, is a group of people and organizations that do their very best to help this community and the needs that they face.  I know that that face has kind of changed with the things that we’ve done in the past.  Like reading with Real Men Read and Power of the Purse.  There are just so many things that we do.  The food, the Mobile Kitchen, for people that can’t get out.  They’re helping people that have needs.  They’re helping out children (to) grow up to be better adults and give them a role model if they don’t have one.  They do so many good things for so many different aspects of the community.  That’s what I see, and that’s what I’m proud of.”

It’s hard not to smile at that final statement.  My interviews for this entire series take place within my first week here at United Way of the Wabash Valley, and the people that I have spoken to have all made me so proud to work here.  I can see the difference that UWWV has made on not only the community but the hearts of those who volunteer to help out the community through UWWV.

Our community is always looking for volunteers capable of any number of skills or even simple tasks.  If you would like to join in the volunteer effort go to UWWV’s volunteer page at https://uwwv.galaxydigital.com/

I’ve broken into a few cracks of Sheriff John Plasse, but there’s still so much more I don’t know about him.  Next week I’ll introduce you to a man who has no problem telling it all and laughing with all his heart.  Not only that, but he’ll tell a bit more about our Sheriff and their amazing and comical friendship.